In my first post I described how I began making an equatorium according to the instructions in the fourteenth-century manuscript I'm researching.  Since writing that post, I discovered a full-size replica made in the 1950s (you can read about that here).  Needless to say, that replica is far more attractive and probably more accurate than anything I can make at home with my saw and pencil, but I never said beauty or accuracy were priorities of mine.  So I went ahead with my own model anyway.  In this post I'll describe how I finished making it; the process of using it will have to wait for a future post. 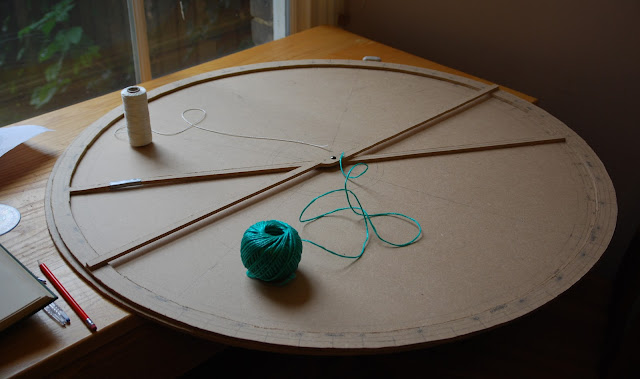 Here's what I made earlier: (1) the "face" - a three-foot disc of MDF; (2) the "epicycle" - a circle three feet in external diameter and 34 inches in internal diameter with a half-inch bar across the middle (patched up with some gaffer tape); and (3) the "label" - a pointer three feet long, fixed to the middle of the epicycle but free to turn around its circle.

My first task was to divide both the face and epicycle into 12 (zodiac) signs, 360 degrees, and 21,600 minutes.  Yes, you read that correctly: the Middle English manuscript can be vague, but here it is quite explicit that "everi degre shal be devided in 60 mi."  This is staggeringly ambitious: even if the the equatorium is made on the six-foot scale demanded by the manuscript, its circumference would only be 18' 10" (5.745m), which would demand almost four minute marks to be squeezed into every millimetre around the instrument (95 minutes to each inch).  It's that kind of unrealistic demand that makes you suspect that the author of the manuscript was describing an ideal instrument, and never expected his instructions to be followed literally.

For me, of course, making a half-size instrument, it's quite enough to divide the face and epicycle into degrees (which works out at 3 degrees to the inch).  But even that is a tricky proposition: dividing a circle into equal divisions is notoriously difficult and time-consuming.  (It was a problem that exercised instrument-makers, astronomers and navigators right up to the eighteenth century - the dividing engine devised by Jesse Ramsden to mark circles mechanically is arguably one of the key inventions of the Industrial Revolution.)  I had a head-start: I bought a cheap protractor and used it to mark out the degrees.  But that circle of dots was obviously quite small; when I tried to extend it by drawing lines from the centre, through each dot, to the rim of the circle, I realised how hopelessly inaccurate this method was.  A tiny error in placing my home-made ruler at the centre of the face could make my markings on the rim as much as a centimetre out.

Accepting that my divisions were bound to be pathetically inaccurate, I proceeded to mark the face of the equatorium for the sun, the moon and each planet.  Because, from our perspective, the sun does not move at a constant speed around the zodiac throughout the year (the number of days between solstices and equinoxes is not equal), the sun's path has to be marked as a slightly eccentric circle (i.e. a circle whose centre is not quite at the centre of the face of the equatorium). 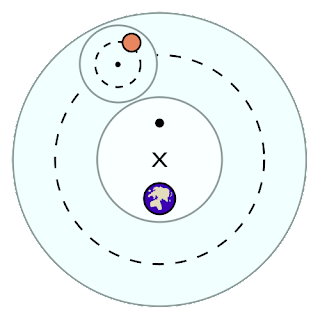 Is that all clear now?  It doesn't really matter: what's important for our fourteenth-century instrument maker is to know that for each planet he has to mark an equant point, and midway between the equant point and the centre of the face he has to mark the centre of the deferent.  The placement of these marks depends on two bits of astronomical data: the constants of eccentricity for each planet, which tell our instrument maker how far from the centre of the face to put the centre of the deferent; and the direction of the aux (roughly similar to the planet's apogee in modern terms), which tells him in which direction to place the deferent and equant.  The first of these figures was constant and had been calculated pretty accurately by Ptolemy; the second shifts slowly (by about a degree every 136 years) and would have to be kept up to date.  But it was not necessary for our instrument maker to do any calculation: he could lift the necessary data directly from the tables which accompanied the manuscript.  These list auges for each planet, for 31 December 1392. 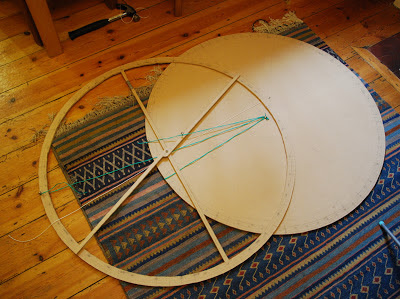 Having marked up the face and epicycle with signs and degrees, deferents, equants and auges, we are now ready to start calculating the positions of the planets.  The picture on the right will give you a flavour of how it works; for a full description, watch this space!