One drawback of spending the summer in Amman is that it's really hard to go out for a run.  With temperatures of 30-35° during the day, dry and dusty air, and pavements that are often blocked or end abruptly, running in the street isn't really an option.

I joined the al-Madina gym at Sport City.  It's a fairly reasonably priced, well equipped gym, but I find running on the treadmill just so dull.  So I was really pleased to find a shady, quiet trail nearby.  I'm writing this post to help other people find it.

I found it with the help of this blog post, which has pictures of the trail and some descriptions of the facilities in Sport City.  Sport City is a large complex that includes the national football stadium, some running tracks, a showjumping ring, squash courts, etc.  Just by the stadium is a wooded area with a small hill.  The trail goes back and forth under the pine trees, making a circuit of about 2 km.  The length isn't ideal (I had to do 11 laps last Thursday) but it's cool (and even smells good) under the trees, and there's no traffic noise.

On the map below (credit: Google Maps), Sport City (or Al Hussein Youth City) is the whole area bounded by the main roads (Queen Alia, Haroun al Rasheed, Al Riyada and the yellow one at the top whose name I forget).  Al-Madina gym is in the building next to the pool in the northwestern part of the complex (the pool is nice, but it costs 15 dinars a day).  There are entrances to the complex at that white building between the pool and the word "Queen", and almost due north of the stadium (I think you can probably work out where the stadium is).  The trail is in the triangular wooded area southeast of the stadium, right under the words "Al Hussein Youth City".  (You don't need to be a member of Al-Madina gym to use it, but if you are, you exit the gym through the disused lower-ground car park, skirt round the stadium, and cut across the main stadium car park.) 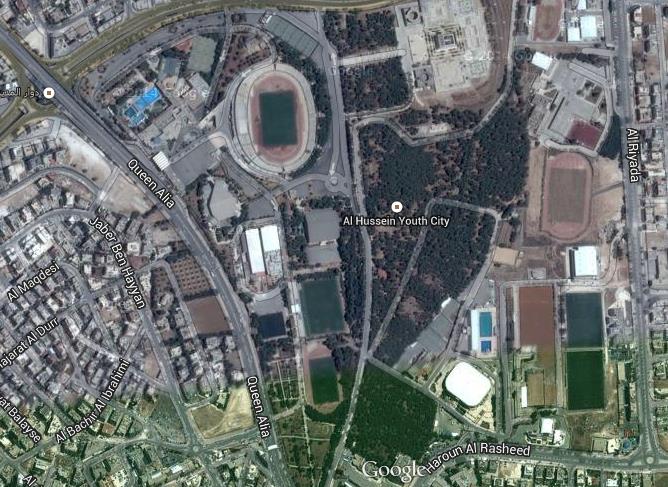 I'd really recommend this trail for anyone like me who can't face more than 20 minutes on the treadmill, but wants to get some decent miles while in Amman.  The shade isn't perfect (don't forget a cap and sunscreen) and it can still be hot, but it's definitely better than taking your chances among the traffic.
Posted by Seb Falk at 12:36 1 comment: