Medieval finger-counting on the BBC

Yesterday I had an opportunity to present some medieval science on the BBC.  I had been asked to contribute to "Free Thinking" on Radio 3.  The theme of the programme was "Hands", so I decided to fill my allocated 4 minutes by talking about early medieval finger-counting.

You can listen to the full programme here - my short essay and interview start at 22 minutes. (You can also download Free Thinking as a podcast on iTunes.)

I also recorded this spur-of-the-moment clip, showing some numbers on my fingers.  A bit clumsy, but I only got one try at it!


If you want to read some more about finger-counting and hand-diagrams in the Middle Ages, I recommend this blog post by Irene O'Daly.  You can also read Bede's The Reckoning of Time in a great edition by Faith Wallis.
Posted by Seb Falk at 15:18 1 comment:

The start of summer? 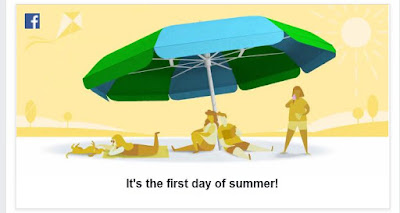 Given that this is the radar picture over the UK this morning, it's not surprising that several Facebook users felt a certain irony. 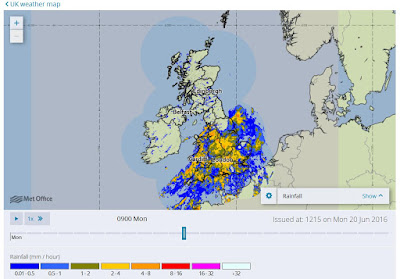 But in what sense is it the first day of summer? As the Met Office explain in a lovely clear blog post, it depends whether you're talking about the meteorological summer or the astronomical summer.  For our forecasting friends, summer began three weeks ago on 1 June.  (Though as my wife often reminds me, summer in Ireland is often thought of as beginning on 1 May.)

But of course I'm interested in the astronomical calendar.  There, summer begins at the summer solstice.  That's today.  In astronomical terms, the solstice occurs when the Earth's axis is most inclined towards the Sun.  Or to put it another way, it's when the Sun stops in its passage north, pausing directly over the Tropic of Cancer before beginning its return journey back towards the south.

Since our calendar years are of unequal length (remember 29 February?), the solstice doesn't occur at exactly the same time every year.  Normally it's on 21 June, but this year, because it's a leap year, it's on the 20th.  To be precise, the moment of solstice will be at 23:34 BST tonight.  After that the Sun will head back south and the days will get gradually shorter.

Medieval astronomers understood this very well.  In his Treatise on the Astrolabe, Chaucer explains that


the Head of Capricorn [start of the zodiac sign of Capricorn] is the lowest point that the Sun goes in winter, and the Head of Cancer is the highest point that the Sun goes in summer. And therefore understand well that any two degrees [of the ecliptic] that are alike far from either of these two Heads, are of alike declination, be it southward or northward; and the days of them are alike in length and the nights also, and the shadows alike, and the altitudes alike at midday forever. (II.16)

This makes the connection between the Tropic of Cancer and the zodiac sign of Cancer quite clear.  (Not the constellation Cancer though; the Sun won't get there for another month, because of the precession of the equinoxes.)  Chaucer points out that any two places that the Sun passes in the zodiac, which are equally far from one of the Heads/solstices, will have the same length days (and nights).

They'll also have the same declination - that is, the Sun will be equally far from the equator (which it crosses at the equinox).  The Sun's declination, combined with its noon altitude, allows Chaucer to find his latitude.  I'm sure you've noticed that the Sun gets higher in the sky in summer.  If you measure its altitude at noon, subtract the Sun's declination at that date, and then subtract the whole lot from 90°, you have your latitude.

Because the Sun is higher in the summer than in the winter, a shadow cast by any object at noon will be shorter.  Astronomers (and even architects) had, since the ancient Greeks if not the Babylonians, been well aware of the usefulness of shadows for marking the seasons; for finding local time, the direction of north, and the direction of sunrise and sunset.

Chaucer wasn't shy of dropping his astronomical knowledge into his poetry, of course.  In the Canterbury Tales, the Merchant describes the weather a few days before the solstice.  It's rather better than today's:


Bright was the day, and blue the firmament;
Phebus [the Sun] hath of gold his streams down sent
To gladden every flower with his warmnesse.
He was that time in Gemini, as I guess,
But little from his declination
Of Cancer, Jove's exaltation [an astrological reference to Jupiter].

Today the Sun will set further north than any other day this year.  But I can't guarantee the weather will be summery enough for you to see it.
Posted by Seb Falk at 13:53 No comments: