Why did Derek de Solla Price come to Cambridge?

In a previous post I introduced one of the main subjects of my research: the historian of science Derek de Solla Price.  Price, you'll recall, was studying for his second PhD here in Cambridge when he discovered the Equatorie of the Planetis manuscript in the library of Peterhouse.  As part of his research, he had what we're calling King Arthur's Table built at the Cavendish Laboratory.

My research has raised lots of questions about Price.  These are interesting not only from a biographical point of view, but also for anyone curious about the atmosphere in which the history of science was launched as a separate discipline in Cambridge in the 1940s and 1950s.  The most obvious of these questions is: why did Price, at the age of 28, suddenly decide to become a historian of science?

This was a big decision.  In 1950 he already had a PhD in metal physics, and was teaching applied mathematics at the then University of Malaya, in Singapore.  He was aged 28, with a wife and baby daughter.  His work was going well: his boss at the University described him as "a very stimulating and helpful teacher."  But something made him give up his job and move halfway across the world.  He came to Cambridge with no prospect of a job and no real idea of what he was going to do.  Why?

With the help of the archives of Cambridge University and the Royal Institution, I have been able to go some way towards answering this question.  Fortunately, Cambridge's Board of Research Studies kept a file for Price, which still exists in the University archives.  In addition, Sir Lawrence Bragg, who was a mentor to Price (and about whom I've blogged previously), kept a good deal of correspondence relating to him; this is now at the Royal Institution.

When Price was considering coming to Cambridge, the historian C. Northcote Parkinson, who was a colleague of his at the University of Malaya but had previously been a fellow of Emmanuel College, wrote to the Cambridge historian Herbert Butterfield.  (Parkinson is now best remembered as the inventor of Parkinson's Law, familiar to all students: work expands to fill the time available.)  Parkinson wrote:


A younger colleague of mine here, an applied mathematician with knowledge of physics, has been taking a great interest of late in the history of science...  I think his career may have suffered a little from the breadth of his interests...  His work latterly has been historical and he has been fortunate in having here a complete set of the Transactions of the Royal Society...

He tells me that he means to return to England in December on the general principle that if he does not return soon he will not return at all.  And he wants, if possible, to find a post as a lecturer in the history of science...  So I have taken the liberty of writing to you... to ask whether there is any opportunity going for Dr Price.

Sure enough, Price did return to England in December 1950.  He found a small house in Cambridge and from there wrote to A.R. (Rupert) Hall, who was the University's only lecturer in history of science, as well as part-time curator of the Whipple collection (which did not yet have a home).  Hall told Bragg about Price's letter:


I am not quite clear what he wants, but I shall be getting in touch with him immediately.  I know that he would like either a Research Fellowship or University post, but it seems to me that there is no chance of either for him at the moment here...

He would also like to work in Cambridge on a research grant, and I should be very pleased to see him here, and give him all the help I can...  But it does seem to depend rather on money from elsewhere.

Bragg suspected that there might be some pressing problem that made Price want to leave Singapore, and urged Hall to investigate.  Both Hall and Butterfield met with Price, who decided to submit an application to study for a PhD in early 1951.  Butterfield wrote to W. J. Sartain, the Secretary of the Board of Research Studies:


He definitely gave me the impression of a person moving to the History of Science as a result of a long-standing interest in the subject and a real internal urge.  I have had many applications from people wanting to try something on in the History of Science, but on the whole I am quite prepared to believe that Mr. Price is a person we ought to observe and take care of.

Finally, it's worth quoting Price's own words, in his application statement:

My professional work as a physicist and my teaching experience have given me a rather wide acquaintance with the use and construction of scientific instruments, and it is this knowledge that I propose to use in the assessment of accuracy and design of early instruments.

So, contrary to Bragg's suspicions about professional problems, or fear about political upheavals in Malaya, it was a simple case of an unfulfilled passion.  (Of course there's certainly more to say about Price's implicit assumption that scientific knowledge and experience were the most important attributes in charting the apparent linear progress of the sciences.)  Price certainly showed his passion when he started his studies in Cambridge, wasting no time in making a name for himself.  He was, of course, to go on to become a successful academic and celebrated analyst of the growth of science.
Posted by Seb Falk at 13:16 No comments:

Last Friday was a proud day, as the object I re-discovered and am now researching went on display at the Whipple Museum of the History of Science.  Here it is in its new home: 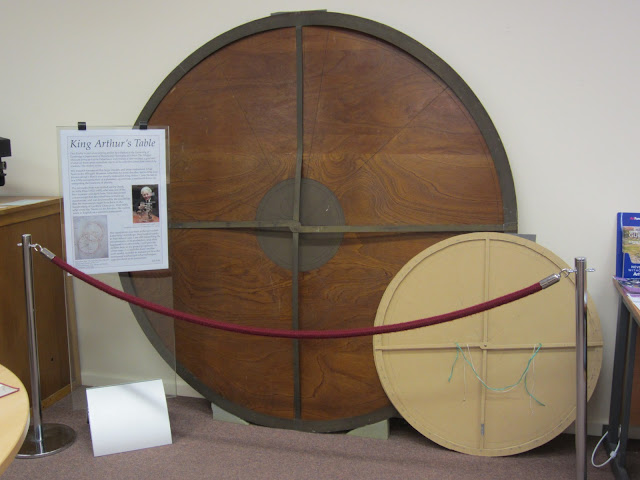 The smaller model is the one I built (see my earlier posts for the full story).  We're displaying both models as an example of research in the Museum, and the work of the Connecting with Collections project.  The glass panel will soon be replaced by a larger one, to allow room for updates on the progress of my research.

This is the second week of the Cambridge Science Festival.  Last Saturday the Whipple Museum had a special opening for Science Saturday, and I gave three short talks about my research, and about medieval astronomy more generally.  The visitors seemed to enjoy getting to grips with the astrolabes!

If you're anywhere near Cambridge, why not go and check out King Arthur's Table?  You can even come back here and leave a comment!  The Museum is open Monday to Friday, 12.30-4.30 p.m, and it's completely free.  There are special tours and object handling sessions this afternoon, and on Friday afternoon - just drop in.
Posted by Seb Falk at 09:47 No comments: