I'm just back from two very enjoyable days in Oxford, at the Bodleian Library's wonderful new Weston Library.  Apart from looking at some fascinating and important manuscripts, I snuck a peek at their Marks of Genius exhibition, which I'd strongly recommend if you're in town (it's free, and on until 20 September).

The view from the David Room on the fifth floor of the Weston Library is pretty special: 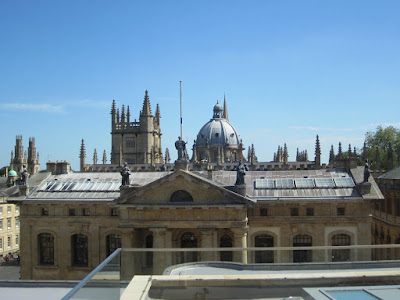 ...though I do still have a soft spot for Cambridge's University Library - this is the equivalent view: 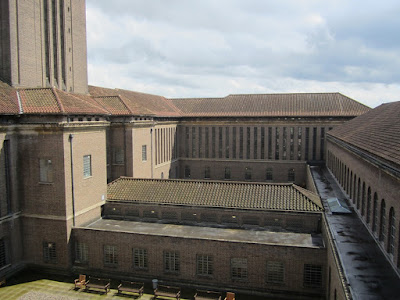 But of course the manuscripts were the main reason I was there.  Hopefully I'll get a chance to post about some of the things I found soon.  But for now, here's a picture of a feathered fellow who seems rather frustrated by Geber's technique for finding the latitude of a star:

Drawing up a medieval horoscope

I've written a blog post entitled "How to cast a medieval horoscope" before.  But I didn't tell the whole story.

Regular readers of this blog (are there any?) will know that the main focus of my research is equatoria - devices designed to compute the positions of the Sun, Moon and planets.  I've made and used two of them - three if you count the fully functional virtual model which I helped create (though I can't claim much of the credit - that goes to the amazing Ben Blundell).

So I know how to find the locations of the celestial bodies - and how medieval astronomers did it, using instruments and tables.  But that's only one-third of the job.  Once you've found the planets, you still need to draw up the horoscope.  And then you need to interpret it.

This post is about the second part of the job - drawing up the horoscope.  What does that mean?  Simply put, it's no use just knowing the planets' positions in degrees of celestial longitude.  Most medieval horoscopes were based on their location in segments of the sky - the houses.  And dividing the sky into houses was no trivial matter.

Astronomers (or astrologers - invariably the same people, who saw no distinction between aspects of their work that we like to divide into Science and Superstition) agreed that there were 12 houses.  But how to divide them up?  The simplest way was simply to make 12 segments of equal celestial longitude.  But that was not a common way of doing it.  A much more common way was to use two key points: midheaven and the ascendant.

Midheaven (or the meridian) is where the Sun reaches its highest point in the sky.  In geographical terms, that's south, but in celestial terms, because the celestial sphere is constantly rotating (think of how the stars rotate during the night), that could be any part of the heavens - any constellation, if you like - depending on when and where you are.

(Remember that the zodiac constellations are the stars that lie along the ecliptic - the apparent path of the Sun against the background of stars throughout the year.  Because the Earth always rotates around the Sun in more or less the same plane, the Sun moves through (passes in front of) a consistent pattern of constellations.)

The ascendant is the point of the ecliptic which is rising (crossing the horizon) at your chosen moment - again, remember the celestial sphere is constantly rotating.

According to the most popular medieval method, the space between the ascendant and midheaven were the last three houses.  So that segment of the sky was divided into three.  The rest of the houses follow in the same way: the points opposite the ascendant (α1) and midheaven (α10) were used to divide up the remaining houses (those opposite points were called the nadir of the ascendant (α7) and the midnight line (α4)).  So, as you'll see in this diagram, there were 6 houses of one size, and 6 of another.


Easy, right?  No, because those 6 houses are the same size in right ascension, not in longitude.  In other words, the space between ascendant and midheaven was divided into equal rising times - equal segments of the celestial sphere according to how long they take to move through the sky.  Those are measured on the equator (since the equator is perpendicular to the earth's axis, equal arcs of the equator rise in equal times).  But longitude is measured on the ecliptic, which is inclined at an angle of roughly 23½° to the equator.  As a result, some pretty complicated trigonometry is required to convert houses that come up above the horizon in equal times, into (unequal) longitudes.

Fortunately for medieval astronomers, they could often rely on tables which would show the longitudes of the cusps of the houses for a given ascendant.  But someone had to draw up those tables, and that was a complicated business, involving some complex trigonometrical formulae and depending on your latitude. (If you want to know more, write a comment and I'll explain!)

Astronomers seemed to take pride in updating and improving the tables to suit their purposes.  For example, one set of tables I've been working on recently shows the longitudes for a given midheaven, rather than ascendant.  And it adds a column with corrections so that you can find the houses at any time of day.  Those changes required a phenomenal amount of re-computation.

Once you've done all that calculation (or used appropriate tables), you can draw up a chart that shows the division of the houses, and the placement of the planets within them.  I thought I'd give this a go for my son, who was born at 9.47 a.m. on 5th December.

Using Excel, I was able to reproduce a medieval set of tables (which was very helpful in understanding how they were originally computed).  I used an astrolabe (following the instructions written in 1391 by Geoffrey Chaucer) to find the ascendant at that date and time, then looked up the divisions of the houses in my new tables.  Finally, I added in the locations of the Sun, Moon and planets, which I'd found using the virtual model equatorium.  (I checked them against Stellarium, a modern computer simulation, and the results were pretty close. 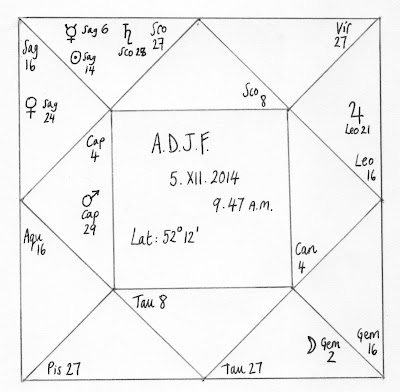 Now all we have to do is interpret it... I predict that will be the subject of a post in the near future.
Posted by Seb Falk at 23:26 4 comments:

I recently attended my first ever Kalamazoo.  This is not a strange musical instrument, or a kind of olive.  It is an annual gathering of 3,000 medieval historians, which takes place on the campus of Western Michigan University, USA.  The breadth of scholarship on offer is legendary - as are the seediness of the campus accommodation, and the scariness of the dancing at the Saturday night disco.

You can watch a video of my conference presentation on vernacular astronomy here.  But in this blog post I've compiled some of my favourite tweets, to give you a flavour of my conference experience...