I started this blog when I reconstructed a medieval equatorium.  I wanted to understand how it worked, and the best way was to follow the instructions in the unique manuscript that describes it.

Last weekend I did it again, with three different instruments: a sextant, a cross-staff, and a mariner's astrolabe.

I'm a keen sailor, and one reason I first got interested in history of science was because of my fascination with navigational techniques.  Lots of stories are told about great explorers, but we rarely hear about their tools and techniques.  Sometimes we hear about great inventions, but those stories are often misleading.  So while everyone knows about John Harrison and his amazingly reliable clocks that helped solve the problem of finding longitude at sea (I recently reviewed the National Maritime Museum's wonderful exhibition on this subject), people don't always appreciate that knowing Greenwich time was only helpful if you could measure your local time accurately.  This was done by observing the altitude of the Sun.  And that was the purpose of all three of the instruments above.

Actually that's not quite right.  The mariner's astrolabe, which came into common use in the late 15th century, started out as an instrument for stellar, rather than solar observation.  It was well known that the altitude (angle above the horizon) of the Pole Star was almost equal to the latitude of the place of observation.  It was also known that the Sun's zenith distance (90° minus the altitude) at noon on the equinox was equal to the observer's latitude, but declination tables to simplify the calculations necessary on other days of the year were not drawn up until the very end of the 15th century.  That's why the first mariner's astrolabes measured altitude, while on later ones the scales were reversed to measure zenith distance.

The earliest mariner's astrolabes were made of wood - we know that Vasco da Gama had a large one, about 60 cm in diameter, on his first voyage to India in 1497.  Columbus also used an astrolabe (as well as a quadrant), though we can't be sure what it was made of.  The oldest surviving terrestrial globe, the Erdapfel of Martin Behaim, contains an inscription urging navigators to use an astrolabe.  These were soon made out of brass, which was a more durable material than wood.

The cross-staff (or Jacob's staff) incorporated simple trigonometry to measure the angle between two objects (such as the horizon and the Sun).  Although it was probably invented in the 14th century, it was not used for navigation until the 16th century.  Before then, most sea travel took place along known routes, staying within sight of land whenever possible - precise measurement of latitude was pointless.  It was only with the first trans-oceanic voyages at the end of the 15th century that the cross-staff and mariner's astrolabe became essential navigational devices.

The purpose of this blog post isn't to give the history of these instruments.  There are lots of great websites and books that do that.  I just want to write about what I learned at the weekend.

I made the cross-staff using the instructions at Richard Paselk's very informative site.  The mariner's astrolabe was just a copy of ones I've seen in books and museums.  They were both made out of off-cuts of wood I had lying around, which I sawed, glued and screwed into shape with the basic tools I have at home.  I finished them just in time for the trip I was skippering for Cambridge University Yacht Club.

I planned the trip for the new moon, hoping that we'd see some good stars (the partial solar eclipse on Friday morning was a bonus).  So, fuelled by chicken and chorizo pasta and some chocolate brownies, we set off from Ipswich on Friday evening at about 10.30 pm.  Sadly the cloud blocked our view of the stars that night.  The following day high winds and rough seas (not to mention more cloud) meant that we were more concerned with sailing the boat safely and effectively, than with astro-navigation.  But on Sunday afternoon the cloud finally cleared and we were able to try out the instruments.

I took some sightings, compared them with my modern plastic sextant, and was pleased to see that both instruments were accurate to a degree or better.  I'd made two cross-pieces of different lengths for the cross-staff, and had done the trigonometry in advance, marking the angles directly on the staff (the further you push the cross-piece away, the smaller the angle between its two ends).  The result was a surprisingly versatile instrument: as well as measuring altitudes, it could also be used to measure the horizontal angle between two (or more) landmarks.  So if you have those landmarks on a chart, you can use the cross-staff to fix your position relative to them.  It was easy to make and pretty robust.  On the downside, it requires the user to point it directly at the Sun, which is pretty hard on your eyes!  It's not surprising that it was superseded by the back-staff, which could be pointed away from the Sun. 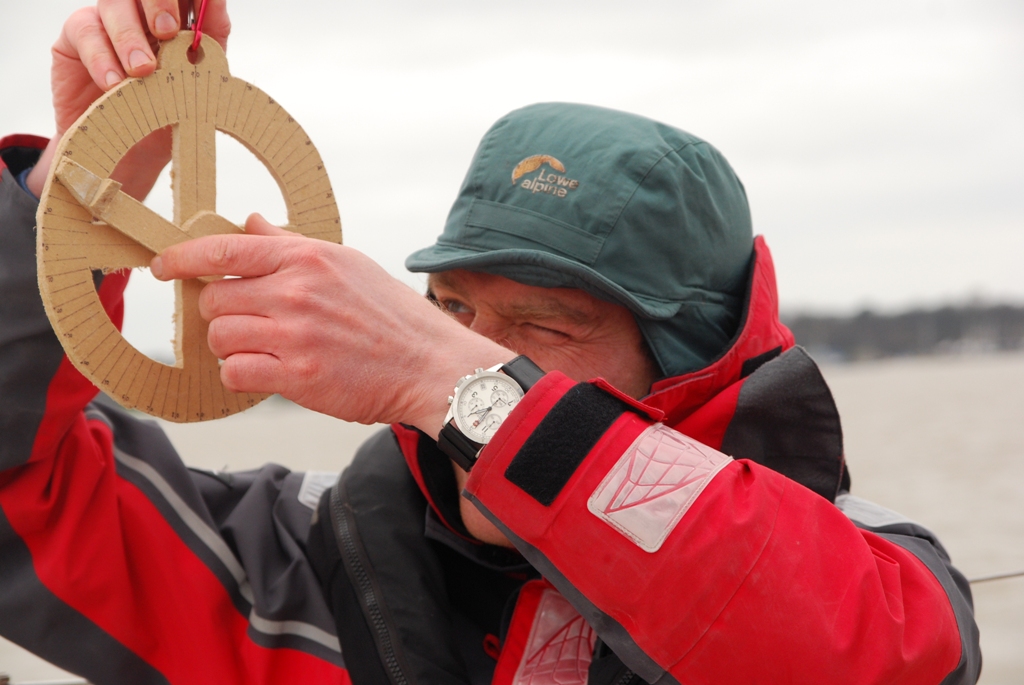 I was less impressed by the mariner's astrolabe.  It was more difficult to make: dividing a circle accurately was a major challenge.  For angles between 10 and 80 degrees it was harder to read than the cross-staff. And despite the fact that I'd made it with holes in the disc, it swung a little in the wind.  I probably should have made it out of brass instead of MDF, I suppose.  On the other hand, you can use it to measure the Sun's altitude without blinding yourself, by letting the shadow of the top sight fall on the bottom one.  But sadly the damp conditions on the boat softened the glue and one of the sights fell off... I bet that never happened to Columbus.

It was fascinating to compare these instruments with my modern sextant: the model I have can measure altitudes to 2' (1/300th of a degree).  My productions weren't that good, but I was pleased that they gave moderately accurate results even though I'm hardly a master craftsman.  Knowing your latitude to within 60 miles isn't much use if you're trying to thread your way through Suffolk sandbanks, but it might help with oceanic passages.  Above all though, I was impressed by the early-modern navigators, whose lives depended on their ability to take accurate sightings, no matter how rough the sea or how fleeting a glimpse of a star they could get.  It makes me appreciate our GPS all the more.