This post is cross-posted from the Ordered Universe project blog (with different pictures). 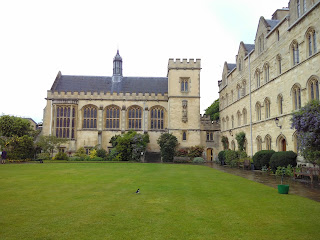 The 18th Ordered Universe symposium – and the fourth held under the sponsorship of the Arts and Humanities Research Council – took place in Oxford, at Pembroke College,  on 17-19 May. We were wonderfully hosted by the College, with lunches and dinners held in its magnificent Victorian Gothic hall; the symposium organisation was smoothly handled by Pembroke fellows Hannah Smithson and Clive Siviour, with indispensable help from DPhil students Joshua Harvey and Tim Farrant.

The symposium focused on an interdisciplinary reading of two treatises, De impressionibus elementorum (On the Impressions of the Elements) and De cometis (On Comets). These can be placed in the middle of Robert Grosseteste’s scientific development, showing traces of his early alchemical interests but also hints of his developing argumentative technique and increasing interest in the nature of light.

We worked quickly through De impressionibus elementorum on the first day (starting from an impressive draft translation made by Sigbjørn Sønnesyn). ‘On the impressions of the elements’ is perhaps a misleading title (and is only found in two of the seven manuscript copies), as the text really concerns what we might today call the states (or even cycle) of water. Grosseteste’s discussion of icy waters, and of fog, dew, rain and snow, centres on the kinds of heat that cause evaporation. So the group spent some time discussing the nature of bubbles, and how they might be ‘dense’ or ‘subtle’, as Grosseteste explains. We were also very interested in his arguments about the layers and overall height of (what we would now call) the atmosphere. 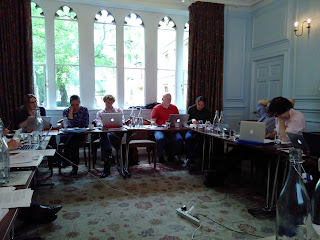 On the second and third days we discussed Grosseteste’s longer De cometis. In this treatise, Grosseteste spends some time establishing a range of incorrect opinions about comets and their tails – opinions, he says, held by people who have observed comets but not thought carefully about them. He explains how comets must be fire that has risen up from the earth and is influenced by a star or planet. They strike fear into the hearts of people whose fortunes will be affected by them! The variety of words Grosseteste uses for the tail of these hairy stars gave us much to discuss, between the relative merits of ‘tress’, ‘trail’, ‘braid’ and so on…

Aside from our collaborative translations, we heard presentations from Francesca Galli (Università della Svizzera Italiana), Brian Tanner and Cecilia Panti, who shared their research into these or related materials. 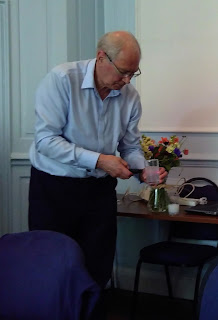 This was my first Ordered Universe symposium, and I loved every minute of it. Two rules were explained at the outset: (1) there are no stupid questions; and (2) participants were explicitly encouraged to make suggestions and take part in discussions away from their area of academic expertise. In practice, as we progressed steadily through the translation, a half-dozen of the twenty scholars round the table did most of the talking about the finer meanings of Latin vocabulary and how best to render words in English. But whenever we got stuck for a minute on what Grosseteste meant when he stated a fact about nature or gave an explanation of causes, that’s when the discussion really opened up. A scientist might draw an analogy with phenomena observed using modern methods, or give a vivid interpretation of Grosseteste’s meaning using a laser pointer and a glass of diluted milk (see photo). These excursus into subjects ranging from water’s unique freezing properties to gravitational lensing were entertaining and enlightening; I did wonder whether the scientists were getting as much benefit from their participation as they were contributing – but occasional bursts of enthusiastic speculation about wacky experiments that might be performed to test Grosseteste’s ideas suggested that they were getting morsels of inspiration for their work.

Reading such fascinating texts with a lovely group of sharp and generous scholars expert in a wide range of disciplines, was a tremendous privilege and a great learning experience. I’d like to thank all the established participants who welcomed me so kindly, and – in addition to those named above – especially Giles Gasper for chairing our discussions so patiently.