Since today is 29th February, a leap-year-themed post is in order.  This one answers the question you've all been asking: how are leap years represented on astrolabes?

First, a word about the Julian calendar.  Most astrolabes were made before the Gregorian calendar reform (1582), and that made life a bit simpler for instrument-makers.  In the Julian calendar, leap years happen every four years, without exception.  On the other hand, the Gregorian calendar got rid of 3 leap days in every 400 years, by decreeing that centurial years (1700, 1800, 1900...) would not be leap years, unless they were divisible by 400.  That's why 2000 was a leap year, but 2100 won't be.

Still, astrolabes have to deal with the fact that one year in four has an extra day.  And astrolabes basically only map celestial motions over a single year.  So how did makers handle the irregularity?

They certainly knew about it.  For the most part they made their instruments to be correct 2 years after a leap year, thus averaging out the errors (which were insignificant anyway).  But that approximation didn't satisfy everyone.

Jean Fusoris, the Parisian craftsman - and alleged English spy - whose trial for treason was taking place exactly 600 years ago, wrote in detail about astrolabe calendars.  He argued that


"Their major defect is that they assume that the Sun on its deferent circle traverses the entire zodiac in precisely 365 days, which is not true."

Fusoris proposed that marks could be added to an astrolabe's alidade (the rule used to read information between the solar and Julian calendars), so that the calendar could be read differently for different years in the leap cycle.

But this still doesn't solve the problem of the Julian calendar.  Fusoris was well aware that one leap day every four years was too much - it meant the Sun effectively moved 1 minute and 46 seconds too far every four years (there are 60 minutes in a degree).  So he suggested you could customise your astrolabe to keep it up to date.

How?  Simple.  Just file down the alidade a tiny bit:


"In this way the instrument will show the true place of the Sun precisely for the lifetime of a man and more, so it is a good way of putting the motion of the Sun on the back of an astrolabe.  It can be done just as the zodiac of the rete of an astrolabe is commonly filed down."

It's important to remember that instruments were frequently customised in this way - they weren't kept in pristine condition as museum pieces, but were designed to be working objects, to be altered and added to just as you might buy a new case for your smartphone.  (Though it may be fair to say that most medieval astrolabe-owners were about as capable of performing these kinds of upgrades as most people today are of repairing their phones.) 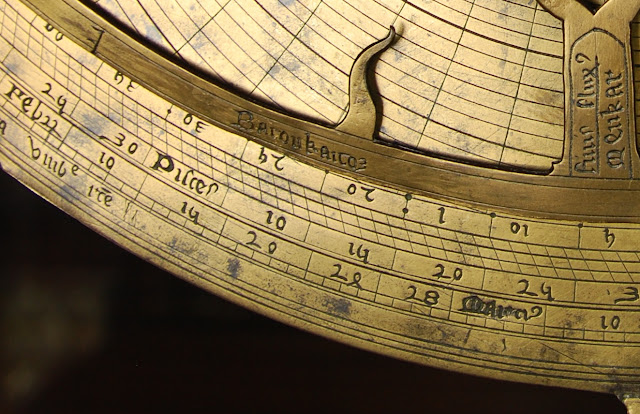 However, some instruments were designed to make leap year calculation easy.  The instrument pictured at the top of this post is a combination astrolabe-equatorium from Merton College, Oxford.  It was made around 1350, when Merton was Europe's centre of astronomical and mathematical learning.  The picture just above shows a segment of the same instrument's solar and Julian calendars.  (They're usually on the back of an astrolabe, but they're on the front of this instrument in order to make space on the back for a planetary equatorium.)  Above where it says "Pisces" in the middle of the picture, you can see there are four curves arcing across the photo from the top-left corner to the lower-right side.  They're crossed at an angle by more-or-less vertical lines.  Those allow the calendars to be read differently in different years.  Depending on which year you were at in the leap cycle, you simply read from the calendar to the solar longitude (or vice versa) using a different one of the four circles.

It's an ingenious solution to what was a pretty complex problem.  Of course the results weren't exact, but they never were with these instruments.  That wasn't the point.  Astrolabes - not unlike like your smartphone today - were designed to be quick and clear, convenient and user-friendly.  And attractive of course.  This one's designer succeeded admirably.
Posted by Seb Falk at 14:49