These questions are the subject of this post, which was prompted by a visit I made recently to the Bell Pettigrew Museum at the University of St Andrews, in Scotland.

The Bell Pettigrew is the University's zoology museum: "a rare survival of a Victorian teaching museum, and wonderfully atmospheric", according to their website.  It's a small, attractively laid-out place, well worth an hour or so of your time.  But I was surprised to find, among the usual bones, some paintings.  This is the first one I saw, in the case dedicated to flightless birds:

The collage-painting depicts a moa, an animal that has been extinct for more than five hundred years.  Here's what the label underneath says:

Now, I have no idea how much is known about the breeding plumage, foraging habits or mating practices of this animal, which was wiped out over 300 years before the arrival of European settlers in New Zealand.*  What I am interested in is the authority of the museum label underneath the artist's impression.

In the nearby Penguin case, there's another picture by the same artist.  You shouldn't have any trouble reading the label this time: 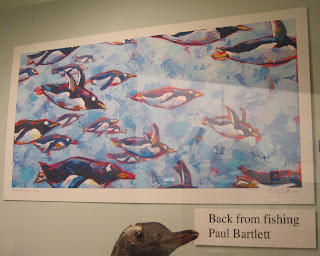 The penguins look rather like they're flying (perhaps they're imagining that they are).  But despite the clear impressionism (small-I and big-I) of this painting, I didn't feel the same discomfort as when I saw the moas.  Why not?  It must have been the label.  The first label, with its impressive Latin binomial nomenclature and technical-sounding words like "breeding plumage" and "foraging females", adopts the authoritative tone of a museum curator.  The second is an incomplete sentence: not at all surprising for the title of a work of art, but obviously not sufficient as the label for a museum object.

The obvious questions are: Who is the artist?  What is his level of expertise?  Fortunately the Penguin case also included a brief biography.  Paul Bartlett studied for a PhD in animal behaviour at St Andrews, before becoming a full-time artist.  According to the biography, "he continually strives to find innovative techniques and styles in which to depict his subjects whilst retaining an element of authenticity."

I found this reassuring and, at the same time, worrying.  The artist whose work is displayed in this museum of zoology clearly has both the expertise and the desire to create authentic depictions of animals in their natural habitat, something that may potentially augment the enjoyment and learning opportunities of museum visitors.  But what does "an element of authenticity" mean?

There's also an obvious difference between painting animals that can be seen in countless videos and photographs, and those that are extinct.  For the latter, artistic licence must surely be tempered by a sense of responsibility.  I was reminded of the paintings of Édouard Riou, the young Frenchman who illustrated Louis Figuier's La Terre avant le déluge (1863).  For this monumental work of popular natural history, Figuier commissioned Riou to produce some attractive engravings.  Riou responded with some hugely vivid but also hugely imaginative works of art, like this one.

La Terre avant le déluge was an instant bestseller, shifting 25,000 copies in the first two years.  Riou went on to work as an illustrator for Jules Verne.  And his illustrations had a huge effect on the way dinosaurs were - and are - imagined (don't forget, no human ever saw a living dinosaur, but we like to think we have a pretty good idea about how they might have behaved).

In the Bell Pettigrew, it's fairly clear that the moa pictured are extinct (though it might have been helpful to include that on the label).  And we can probably be sure that, despite what appears in the collage, its breeding plumage didn't incorporate printed text.  But it does make you wonder about the authority of museum labels.

I'm not arguing that we should go back to having unlabelled, uninterpreted, unconnected skeletons lined up in cases.  But I'm not sure there's a place for artistic licence in zoology museums either.

*I will note that, according to the ever-reliable Wikipedia, only "two species of Dinornis are considered valid, D. novaezealandiae of the North Island, and D. robustus of the South."  Another website, the excitingly-named carnivoraforum.com, states that D. giganteus and D. robustus are the same thing - two birds that were long considered separate species have recently been identified as males and females of the same species.  But according to nzbirds.com, "Dinornis giganteus lived in the North Island of New Zealand and D. robustis in the South Island ... The species Dinornis giganteus and Dinornis struthoides are now placed in the synonymy of Dinornis novaezealandiae."
Posted by Seb Falk at 15:27