Titbits in the archives: how to make and move an equatorium

At the start of this project I was only hoping to find some documentation linked to the equatorium that Derek Price built - so I was amazed when I found the equatorium itself.  It's now on display in the Whipple Museum for the History of Science (open Monday-Friday, 12.30-4.30; admission free).

But I still haven't found much of the documentation I was searching for in the first place.  I imagined I'd be able to track down at least a few references to the equatorium in the archives... but I've had little luck.  As always, of course, we researchers are dependent on what people thought was worth keeping.  In my case, because both the Cavendish Laboratory and Derek de Solla Price made big moves (to west Cambridge and the USA, respectively) not long after the equatorium was made, very few papers are conserved from that period.

However, I have had a little luck in other archives, and with the help of Derek Price's family I've been able to piece together a few more details about the early life of King Arthur's Table.

As I explained in a previous post, it was made in the Cavendish Laboratory, which was run at the time by Sir Lawrence Bragg.  Bragg had deliberately structured the Cavendish to create plenty of spare capacity in the workshops, so that experiments would never be delayed for want of a particular piece of equipment.  This helps explain how it was that a History student was able to get a model of a medieval astronomical instrument made by technicians who were more used to working on cutting-edge apparatus for experiments in molecular biology or metal physics.

What I hadn't realised was how quickly Price got the model made.  He first examined the manuscript in December 1951 and within weeks, it seems, refocused his entire research to place this one document at the centre.  As his diary shows, by March he was ready to make a model of the instrument described in the manuscript. 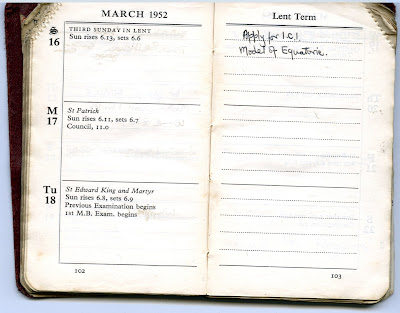 The model - King Arthur's Table - was certainly complete by May, because that month Price showed it off at a "Conversazione" at the Royal Society in London.  (In fact it's likely that the opportunity to describe his research at the Royal Society was a significant spur to the model's production.)

One thing I'd been wondering about this episode is how Price was able to move the model to the Royal Society.  After all, it was stuck in storage for many years precisely because it was too big to fit in a car!  As it turns out, Price had some help.  In the private papers of Rupert Hall, Price's supervisor and the first curator of the Whipple Museum, I came across a note detailing the travel arrangements for the Conversazione.  As neither Price nor the Museum had the capacity to transport such an item, Hall arranged to borrow the Chemical Laboratory van for the day.  The note instructs Hall to contact "a Mr Thompson" in the Department of Chemistry, in order to make the final arrangements.

In themselves, such diary entries and typewritten notes provide little information.  But they are small pieces of a much larger puzzle; it is through such scattered evidence that we must attempt to construct a coherent narrative.  I've realised how unlikely I am to have a "Eureka!" moment in the archives.  Rather, one must be grateful for whatever small titbits on offer, and make the best possible use of them in building better historical understanding.
Posted by Seb Falk at 16:02