How I found King Arthur's Round Table

I've just started a research project focusing on a medieval manuscript, The Equatorie of the Planetis.  This manuscript describes the construction and use of a curious astronomical instrument, and my previous post was about the first stages in my attempt to reconstruct that instrument, in order to better understand the manuscript.

I'm still working on that, and will write all about the fun I had trying to divide a three-foot circle into 360 equal degrees very soon.  Before that, though, here's a tale of intrigue to liven up your weekend...

I'm not the first person to study The Equatorie of the Planetis, or indeed to make a replica of it.  The great historian of science Derek de Solla Price researched it for his (second) PhD in the 1950s, and published an edition of the manuscript, complete with detailed commentaries in which, among other topics, he put forward his argument that the manuscript was by Geoffrey Chaucer, and indeed had been written in Chaucer's own handwriting.  Price was friends with the Nobel Prize-winning physicist Lawrence Bragg, who by the 1950s was running Cambridge University's Cavendish Laboratory, and Bragg arranged for the Cavendish technicians to make a full-size replica of the Equatorie.

I had read that Bragg's gift was "to be hung in a place of honour on the end wall of the big room" of the fabulous Whipple Museum of the History of Science in Cambridge.*  But none of the Whipple's current staff was aware it existed, let alone where it might be now; and the quote above could conceivably have meant that the equatorium was intended to be hung in the Whipple, but never actually made it there.  So I wasn't very confident, but decided I'd have a go at finding out what happened to the mysterious equatorium.  I thought I might at least be able to find some of the paperwork connected with its production at the Cavendish, and maybe some hints about its fate.

I made an appointment to check out the Whipple's archives and, when I met up with the archivists, explained to them what the equatorium was and what the replica might have looked like: a six-foot wooden circle with a similarly-sized brass ring attached.  They looked at each other for a moment, then one said "do you think it might look a bit like this?"  On the computer screen they showed me a museum database record for an unidentified object.  Although I'd obviously never seen the Equatorie, I instantly recognised from the photo that this mystery object must be Price's replica.  The object was described accurately in the database record but the cataloguer, not knowing precisely what it was, had apparently struggled to come up with a title for the record.  So this six-foot wooden circle had been officially named King Arthur's Table!

We went out to the stores and, as carefully as we could given its size, wheeled it out from its resting-place behind a large storage cupboard.  It was dusty and a bit scratched, but unmistakable. 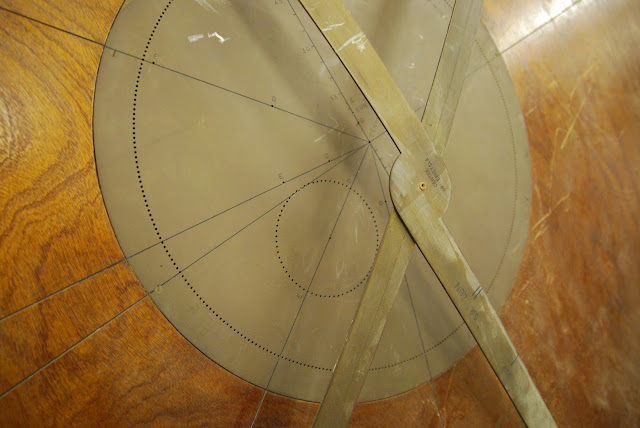 I'm now gradually piecing together the story of this remarkable item.  It was made in 1952 and soon afterwards given to the museum, where it hung happily for a few years.  However, as both the museum collection and the Cambridge University Department of History and Philosophy of Science expanded, it seems there was not room to display it, or to store it on the premises.  It was moved to a storage facility for about a decade.  In the 1970s, the Whipple's curator wanted to move some items out of that facility, but, he told me, the stairs were so rickety that no contractor would take the job.  So he did it all himself.  Unfortunately, the Equatorie was too big to fit in his car so it lingered in the same storage facility for another few years!  Finally it was moved into the Whipple's current store in the 1980s.

Hopefully it will soon be back on display in the Whipple Museum.  However, it may have to lose its splendid Arthurian name, which would be a slight pity as it does capture the romance of the Whipple's early years (not to mention my own quest).  I think I know why they called it Camelot now...

(* The quote is from the Whipple's 60th anniversary publication, an excellent collection of essays on a range of subjects associated with the museum.)
Posted by Seb Falk at 15:58