The Moon on a stick*

Want to know how to find the moon?  Of course you do!

So far on this blog I have constructed and calibrated a medieval planetary equatorium, and shown you how to use it to find the longitudes of the planets (most recently Mercury).  Now it's the turn of the Moon.

This will be a two-part post, because - unlike for the planets - our equatorium will not only tell us the longitude of the Moon, but also its latitude.

Celestial longitude is measured on the ecliptic, which is a circle in the sky angled at about 23½° to the celestial equator (the projection of the earth's equator outwards onto the sky).  Throughout the year, the Sun, Moon and planets move steadily around the ecliptic.  The Sun, by definition, sits on it; the Moon and planets may stray a little from it, but won't go far.  That's why medieval astronomers didn't worry about the planets' latitude (which is a measure of angle above or below the ecliptic).

The Moon, though, is different.  Classical and medieval astronomers were certainly interested in knowing its latitude.  Can anyone guess why?  (Feel free to comment; you may even win a prize.)  So our equatorium will tell us the Moon's latitude, and that will be the subject of my next post.

But let's talk about longitude now.  The Moon's longitude was modelled by Ptolemy in broadly the same way as for the planets, with a deferent and epicycle (for a refresher, read my explanation here).  There's one crucial difference, though: there's no equant.  Remember that the equant point was the centre of the motion of the epicycle around the deferent, which helped to model the irregular motion of the planets.  But since, for obvious reasons, the Moon's motion as seen from Earth is much more regular, there's no need for an equant point.

But we do still have a rather complicated setup with a moving deferent centre.  This accounts for the fact that, for medieval astronomers, the Moon's movement still seemed somehow to be linked to the Sun's.  (Hardly surprising to us, since the Earth orbits the Sun and the Moon orbits the Earth, but not so obvious to medieval scholars.)  In order to find the Moon's deferent, we need to look up the Moon's mean motus (the location of the centre of the epicycle, as measured from the constellation Aries) in our tables.  From this, we subtract the Sun's mean motus to find the deferent centre (if you get a negative answer, add 360°). 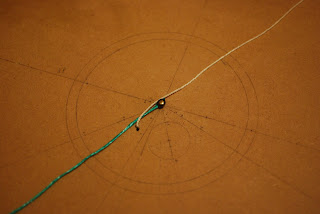 The deferent centre thus moves in a circle around the Earth.  Opposite it on that circle is another point known as the centrum oppositum.  We'll make use of that in a minute.

So, once we've worked out the location of those two points and marked them with our black and white string (pictured right), we get out our big Epicycle.  We put it with its common centre deferent reference point on the Moon's deferent centre.  Then:

1. As with the planets, we move the "black" string to mark the Moon's mean motus on the edge of the face of the equatorium.
2. We move the centre ("pole") of the big Epicycle so it's under the black string, while keeping the common centre deferent in place.  Note: we haven't done the trick with the parallel white string - remember there's no equant this time.  (This change seems to have flummoxed the author of the Equatorie of the Planetis manuscript I'm studying - he was a bit confused on this point.)
3.  Run your white string from the centrum oppositum, over the pole of the Epicycle, to the far side of the Epicycle (see picture).
4.  Starting from where the white string crosses the far side of the Epicycle, turn the movable pointer ("label") clockwise [unlike with the planets where we turn it anticlockwise] to mark out the number of degrees corresponding to the Moon's mean argument, which we find in our tables.
5.  As with the planets, stretch the black thread to the mark for the Moon on the label (see below).
6.  Where the black thread crosses the edge of the face, is the Moon's true place (longitude). 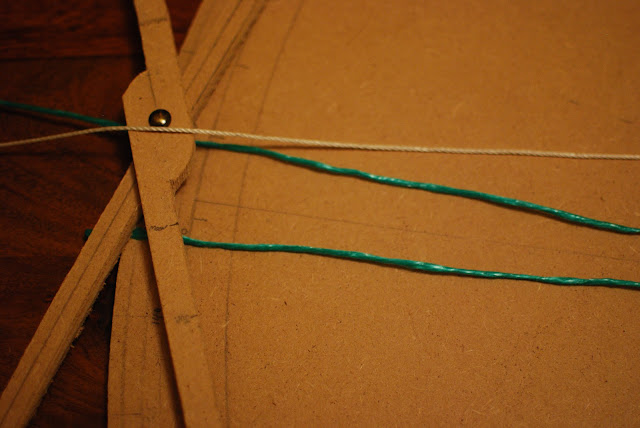 And that's it!  Now you can find the Moon, even on a cloudy night.  In the next post, we'll learn how to use the equatorium to find its latitude.  Don't pretend you're not excited...
Posted by Seb Falk at 21:16