How to predict an eclipse 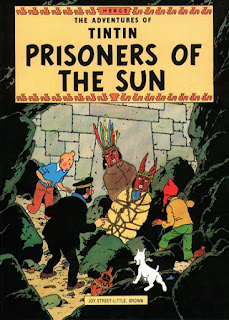 Who's read Prisoners of the Sun?  In this enthralling Tintin story our hero is captured by a group of Inca who have survived in secret.  He and Captain Haddock are sentenced to be burned alive; their pyre is to be set alight by the rays of the sun.  Tintin is allowed to choose his time of death and cleverly picks the execution to coincide with a solar eclipse.  The amazed tribesmen believe he can command the sun god and immediately set him free.

This trick is not entirely fictional: Christopher Columbus pulled off something similar.  His son Fernando (considered a fairly reliable biographer) writes that in 1504 Columbus, stranded on Jamaica and undermined by mutiny, needed more supplies.  So he invited the local chiefs to a feast and, according to Fernando,

told the gathering [that] God was very angry with them for neglecting to bring us food ... and had determined to punish them with famine and pestilence...  They should therefore attend that night the rising of the moon: She would rise inflamed with wrath, signifying the chastisement God would visit upon them... At the rising of the moon the eclipse began, and the higher it rose the more complete the eclipse became, at which the Indians grew so frightened that with great howling and lamentation they came running from all directions to the ships, laden with provisions, and praying the Admiral [Columbus] to intercede with God. (p. 261)

Useful party piece, eh?  Well, you'll be pleased to know that you can pull this one off using your own planetary equatorium, which you've built using the instructions provided on this very blog.  In the last post I explained how to find the Moon's longitude.  If you're looking for the planets, longitude is usually enough, because they stick fairly close to the Sun in its annual journey (the ecliptic) across the background of fixed stars.  But for an eclipse, "fairly close" is not enough.  The Moon's latitude can be ±5° (celestial latitude is measured from the ecliptic), but an eclipse will only take place when it is 0° - that's why the ecliptic is called the ecliptic!  So in this case latitude is rather important to us, and to medieval astronomers.

Fortunately, it's quite easy to predict.  Here's what you do.  You need two pieces of information: the Moon's true motus, and the true motus of Caput Draconis.  Caput Draconis (which of course means the head of the dragon) is one of the two lunar nodes (the other, directly opposite it, is called Cauda [tail] Draconis) - the two places where the Moon's inclined orbit intersects with the ecliptic.  The nodes move steadily through the sky at a rate of about 19° a year, and their true motus is listed in any good set of astronomical tables like the one in our manuscript. 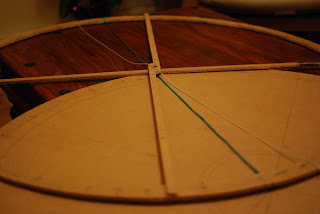 The Moon's true motus crops up naturally in the process described in my last post.  In the picture on the right, the green thread has been used to mark the Moon's mean motus (which we took from our tables), and the white thread has been stretched across the pole (middle) of the epicycle from the centrum oppositum.  The angle between the green and white thread is called the equation of centre, and that angle plus the mean motus is the true motus.

Now all we have to do is find the difference between the two true motuses.  (If it's more than 90° we may have to fiddle the figures a little, but that's not too tricky.)  Then find that number on the face of your equatorium, and stretch a thread horizontally across to the other side (as I've done in the photo below).  In the middle it will cross a line which our author has called line alhudda.  When we marked up the face, we divided that line into five (corresponding to the Moon's full range of latitude), so we can simply read off the point where our thread crosses the line.  In the case pictured below, it's about 2.6°.  Whether it's positive or negative will depend on whether we subtracted the true motus of the Moon from that of Caput/Cauda Draconis, or vice versa. 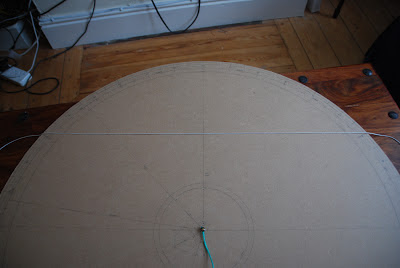 That's it!  As I said, if the Moon's latitude is 0° (and its longitude is either the same as the Sun's or 180° away), we'll have a lovely eclipse.  Remember that, it may save you from execution...