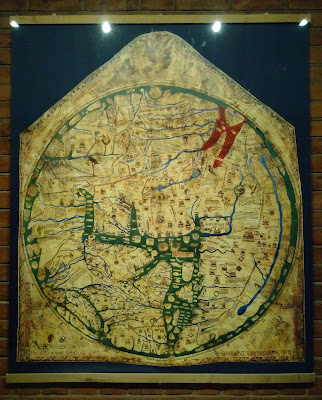 Girton College, the Cambridge University college where I am lucky to work, owns a full-scale facsimile of the Hereford Cathedral Mappa Mundi.  It was given by Girton alumna Dr Margaret Mountford (yes, the one from The Apprentice) and hangs in a corridor near the college hall.

I've walked past it so many times that I thought I should sit down and take a closer look.  Here are a few things I found (presented in the form of some tweets I posted).

In a way it’s Even Better Than The Real Thing, as it was digitally enhanced to approximate the colours of the c.1300 original. 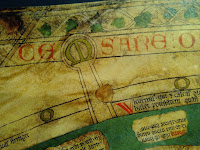 This is God’s world, & further reminder of our fate is MORS (death) spelled out in gold letters around the edge.  Here’s the M.

The M is in the northeast: you can see the O’s where “septemtriO” meets “Oriens”.  Underneath you can see Wlturnus, one of the 12 winds. 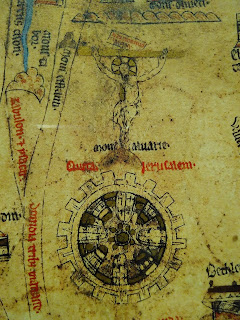 The map is both deeply symbolic and the product of careful scholarship. At the centre is Jerusalem, with the crucified Christ above. 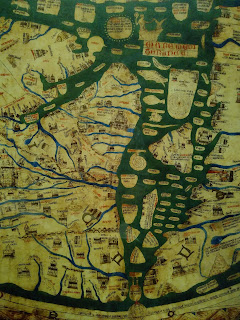 The north coast of the Mediterranean Sea (on the left: E is up) also traces the curve of Christ’s body, with the Cyclades islands marking his head.

Here Noah’s ark “came to rest in the mountains of Armenia”.

There’s plenty of geographical detail. Here it says the length of AFFRICA from Ethiopian Sea to Alexandria is 1725 miles.

But note he’s written “longitudo” twice; he realised his mistake, put dots under the second one & added “Lat” to correct it to latitude.

But one big mistake that wasn’t corrected is that Africa was accidentally labelled “EUROPA”, and vice versa! 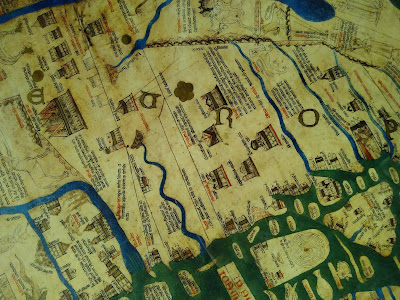 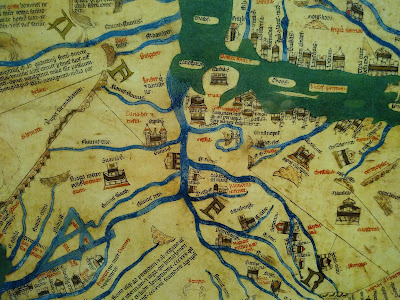 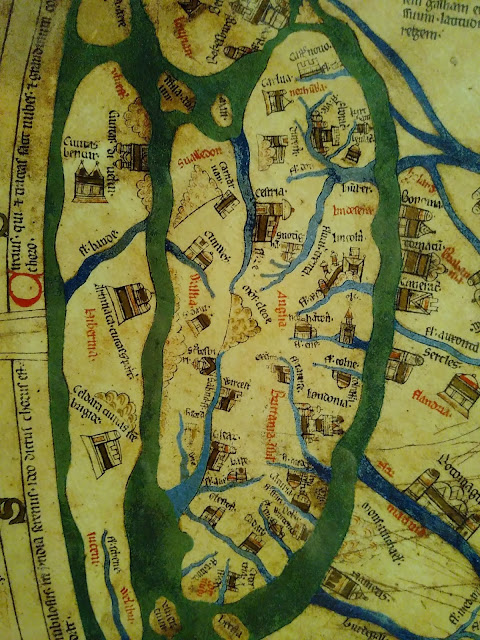 Britain & Ireland show huge local knowledge.  Lincoln is particularly detailed, not surprising since the map was probably designed there. 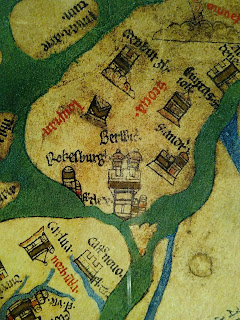 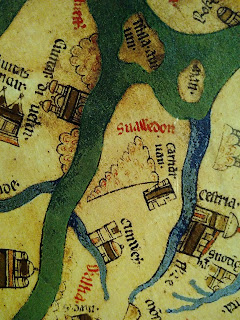 Here is Snowdon, just across the sea from Dublin (civitas divelin). 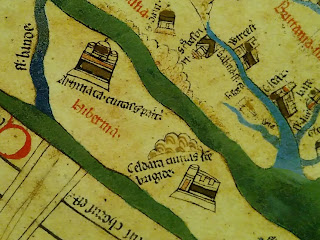 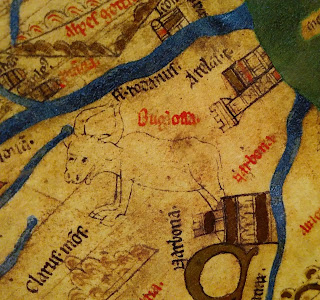 There’s less astronomy than I expected [EDIT: not that one would naturally expect astronomy on the largely symbolic mappae mundi, but this one is cosmologically compendious and its designer had clearly read his Martianus Capella and Pliny.  It is overall rather more scientifically informed than previous historians have given it credit for.].  Just two possible (unlikely) references to the zodiac: Taurus (“Buglossa”) and Scorpio: 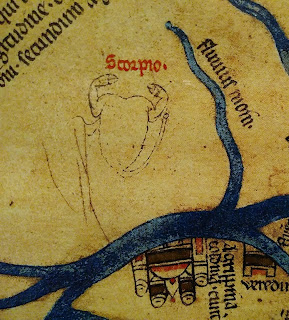 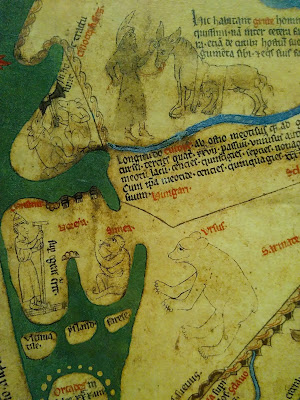 There’s a bear near Scandinavia (note also the Norwegian on skis, & the Griste people who make saddles from the skins of their enemies)

At the bottom the map’s designer (?), Richard of Holdingham, is identified with biblical and classical allusions. 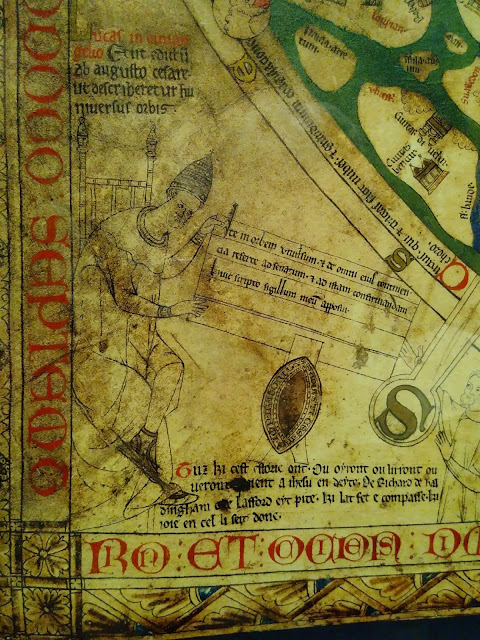 Above is a passage from Luke’s gospel: “there went out a decree from Caesar Augustus that the world should be described”.

Augustus (with papal tiara) hands his instructions to 3 classical geographers.  In the middle is the S of MORS. 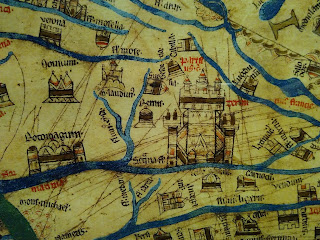 It’s been suggested that the map was vandalised by someone who didn’t like Paris (note the I of “Affrica” at the top right). 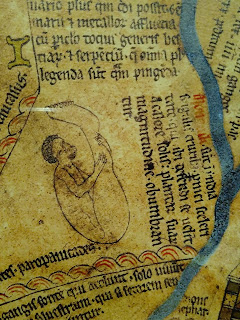 Let’s not forget the famous mythical people, like the Monoculi who shade themselves from the Indian sun with their one huge foot.

There’s so much rich & precise detail, drawing on at least a dozen sources.  Why not visit Hereford Cathedral (or study at Girton College) & see it for yourself? 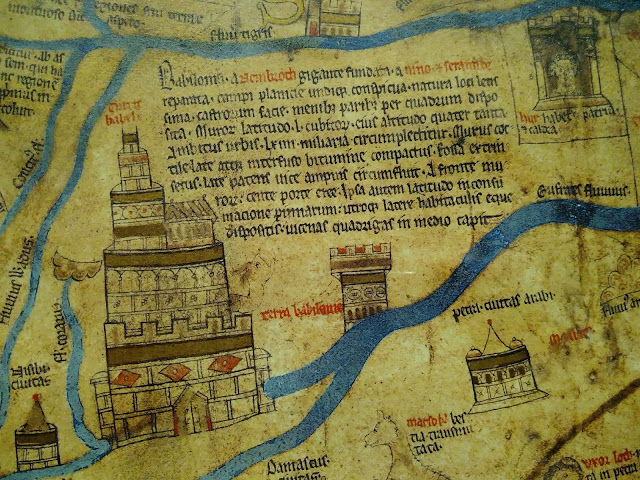