How do you digitise a mortuary roll?

A few weeks ago I went on a fascinating course: Medieval and Modern Manuscript Studies in the Digital Age, run by the Digital Scholarly Editions Initial Training Network (DiXiT), based at the University of Cologne.  This was a fascinating course that aimed to train early-career scholars like me to work with manuscripts and digital technologies, at a time when so many libraries are putting their collections online. 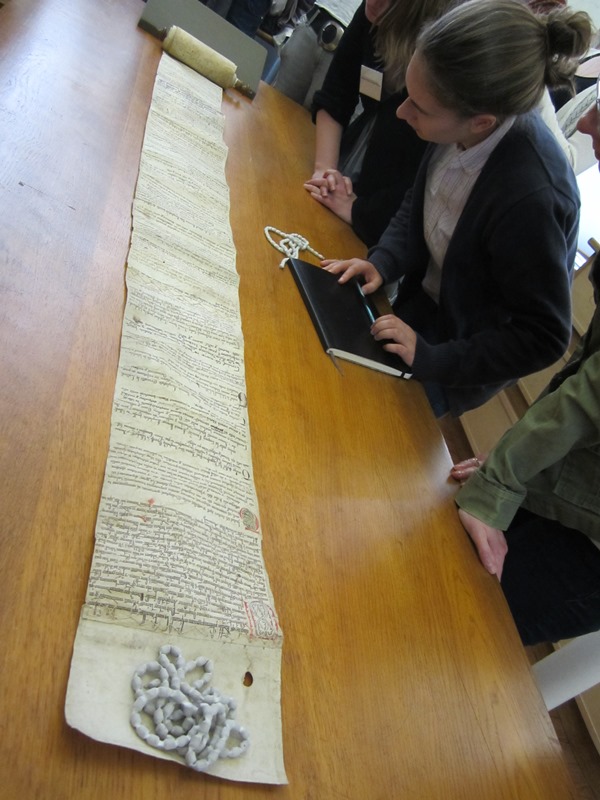 The course combined palaeographic and codicological training, with classes on writing XML using TEI encoding, and visits to libraries in Cambridge and London to see their treasure-houses of medieval manuscripts.  I hope to write a post with my thoughts on the course as a whole, but for now I want to share a couple of photos from a visit to the library of St John's College, Cambridge.

While at the library we looked at a number of beautiful and important manuscripts, including a gigantic Spanish antiphonal.  But I was particularly struck by the one on the right.  It is the mortuary roll of Amphelisa, the prioress of Lillechurch in Kent.  After she died, sometime between 1208 and 1221, this scroll was sent around the monastic houses of England, so that each house could write something expressing their intention to pray for the deceased.  I suppose it's a bit like those leaving cards people get when they change jobs!

Anyway, I was excited to see that near the top of the 378 houses that participated, were some near where I grew up - you can of course track the progress of the messengers and their cargo around the country, as well as the changing handwritting patterns in different places.  But it also raised some practical questions, which I shared on Twitter:

That led to a little further discussion:


I don't have an easy answer to this issue - really I wanted to share these photos because I thought the roll was fascinating, as well as fun.  But if there is a conclusion to be drawn, perhaps it's to remind us that there are some aspects of manuscripts - their smell, their feel, their physicality - that will never be adequately conveyed in any digital form, however sophisticated.