Touching, But What's the Point?

Astrolabes and Stuff is proud to present its first ever guest post!  For this we must thank Jenny Bulstrode, a student in the Department of History and Philosophy of Science at Cambridge.


Quadrants, sextants, octants, none of them really meant much to me until last year. They’re all descendants of astrolabes. They’re all based around a circle with a scale marked on it. They’re all just fans of metal with bits on. The only way I could see the Navy using one was as an elaborate bottle opener.

If anyone asks all you generally need to know is this versatile bit of kit was a tool for measuring the angle between two distant objects. This made it handy for everything from telling the time to surveying.  Last year I found out a bit on how they were used but rather more on how one particular eighteenth century instrument maker, John Bird, made them, and why we should care. It’s these last two points I want to share with you.

Metal expands when heated. Enough to get the lid off that gherkin jar by running it under the hot tap, more than enough to mess up the precision process of marking a scale on a circle. John Bird used the warmth of his hands to standardise the expansion of his tools and the circle he was working on. As if that doesn’t seem odd enough, he then wrote about it, in his instruction manual.

Temperature control was so important Bird wouldn't allow a fire to warm the room. Even candles were forbidden because they gave out too much heat. (Actually my mum has a similar policy for controlling utility bills). With little light to work by Bird detected points and traced guideline scratches using his fingertips. Magnifying lenses were widely used by eighteenth century instrument makers, including Bird, but what he really had faith in was his sensitive touch.

Finally, when checking back revealed a point slightly out of position, Bird would ‘coax’ it into place. Extraordinary as it sounds, through fingertip pressure on the brass, he would shuffle the point along. His fingertips worked to control, detect, and even correct the scale marking process. 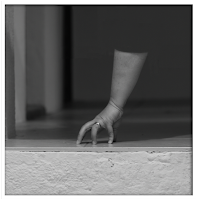 All very touching (see what I did there?) but what’s the point? Three things stand out to me. Firstly, John Bird was one of the last circle dividers working exclusively by hand. Towards the end of his life new, automated machines started taking up the job. That’s the old story of mass-production taking over, right? Except for nearly a century after his death these ‘automated’ machines used handmade circles, including Bird’s, to cut copies from. The action of the machine had to be guided, by hand. In fact even when the machines made errors, which they did, often, the points were still ‘coaxed’ into place. Bird might’ve died but his hands were still very active...

Secondly, handmade does not just mean surprisingly expensive bread. Of course it means those elements of delicacy, care, and exclusivity we associate with a walnut and fig pavé but it can also mean industrial quality control. When Bird used his hands to control the expansion of the metal he was setting an industrial standard. Granted it was one based on his body temperature but the principle for control was the same.

Finally, and above all: Bird achieved an unprecedented level of precision in his instruments. In fact, he divided circles so precisely he was commissioned to make the Mural Arc at Greenwich. This Arc set the standard for British Mean Time. I think if there is a point to be taken from all this it is that a huge idea like ‘Time’ can be traced back, defined even, to something as human as the pressure of a man’s fingertip.