Museums and their Public

What do museums owe the public?  And what should the public give museums?

These questions have been on my mind recently, as I've been completing an internship at Cambridge's Whipple Museum of the History of Science.  The Whipple is part of Cambridge University and has an ambiguous relationship with the public.  It is open to all, and entrance is free.  But the founding charter of the Museum emphasizes its importance as "a teaching instrument and an accessory to modern research."  So it is first and foremost a resource for the University.

Visitors to the Museum sometimes ask if the opening hours - currently Monday to Friday, 12.30-4.30 - could be extended.  And the Museum has started opening on a few Saturdays each year.  But because it doesn't charge for admission, and is not publicly funded, it can treat its visitors as guests rather than customers: they are welcome, but their rights are limited. 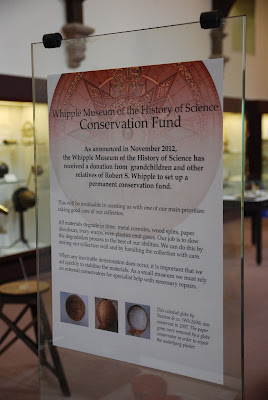 Nevertheless, of course it's ridiculous to say that the public has nothing to offer the Whipple.  For starters, there is a donation box right in front of you when you walk into the beautiful 17th-century main gallery.  And the Museum has benefited in the past from bequests and legacies from large-scale individual donors, and will continue to welcome such gifts in the future.  Those donors are not all connected with the University.  Less directly, if the Museum is primarily a research institution, it needs researchers.  How will the next generation of reseachers gain access to, and become interested in, the material culture of science?  Finally, what's the point of doing research unless you're going to tell people what you've found out?

The question underlying all of this, of course, is: who is the public?  It's a question that has been implicit in a lot of recent media coverage of arts funding, with renewed discussion of the reintroduction of admission fees to publicly funded museums.  Among other points, it's been suggested that museums don't truly serve the general public - only a minority, from the middle and upper classes - so they shouldn't be publicly funded.  And I've heard several people ask why UK taxpayers should subsidise the vacation activities of foreign visitors to this country.  Maybe we should make tourists pay?

These questions were put into new perspective for me when I visited the USA recently.  In New York I went to two top attractions: The Metropolitan Museum of Art, and the 9/11 Memorial at Ground Zero.  Both are open seven days a week, and they have the same policy on admissions fees: pay whatever you like.

The Met is quite secretive about this policy.  The word "recommended" does appear about the admissions fees on their website, but they advertise the principal benefit of membership (basic cost: $70/year) as free admission to the Museum, which would be odd unless most people were unaware that it is free anyway.  (Or almost free: I believe the official policy is that you must pay something, if only 1 cent.)  I certainly wouldn't have noticed unless I had been tipped off.  In fact the Met was recently sued for not making it clear enough that it was free - a charge vigorously contested by the Met's Director, who pointed out that not only are there clear signs that it is free, but also all their special exhibitions are free too - something that can't be said of our own cherished institutions such as the British Museum and National Gallery.

So what does this policy tell us about the Met?  Simply, I guess, that it is there for the public, but that it needs to maximise its income (only a small proportion of its running costs come from the public purse).  Locals can come and go as they please, but by making visitors line up and collect a ticket, the Museum does its best to ensure that it extracts at least a small donation from them.  (I did pay something, albeit not the full recommended fee.)  By giving people the option to pay less (or more), visitors are forced to consider what the opportunity to see a world-class collection of culture is worth to them.  Is it worth as much as a trip to the cinema? A ticket to a sports game? Dinner at a restaurant?

Yes, I felt a little uncomfortable when I stood at the ticket desk and handed over my smaller-than-recommended banknote - but that's as it should be.  It made me think about the value of all this - and in any case, it's a small price to pay when you consider that the admissions fees not only fund the acquisition, conservation and presentation of the peerless collection, but also first-rate visitor facilities such as the excellent MyMet pages on its website, which together with free Museum wi-fi mean you can save any object to look at later, or download high-resolution images.  I wish all those people taking photos of the Monets knew about this!

The issue is a little different at the 9/11 Memorial.  The front page of their website has a large highlighted option to "reserve free visitor pass", though there is an online booking fee, and when I went to the Preview Site/gift shop to get a ticket on the day I visited, I was asked how much I wanted to donate.  Once again the question has to be: who is the public?  Who is this for?  Is it a memorial to the 3,000-odd people who died on that day in 2001?  A park for relaxation and contemplation amidst the hubbub of downtown Manhattan?  A defiant statement against terrorism from/for the people of the world?  Can it be all those things? 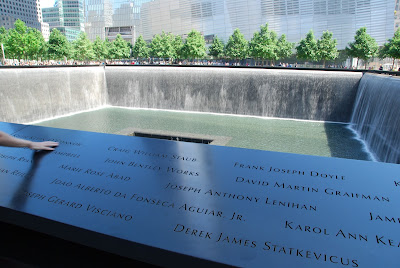 It could be argued that the best way to defy the terrorists would have been to redevelop the site as if nothing had happened, filling it with more high-rise hotels and office blocks.  Indeed I might (somewhat facetiously) note that the tight security measures - my bag was X-rayed and my ticket checked fully five times - suggest that, in some way, Osama bin Laden won.

Even without the airport-style security, it's hard to see people using this as a tranquil green space.  For one thing, the two huge waterfalls that fill the footprints of the Twin Towers are incredibly loud.  This means that visitors are not as hushed as I would have expected.  When I visited the makeshift memorial that preceded this one, in 2007, there was a respectful, awestruck silence; you could sense the raw emotion.  I didn't feel that this time.  Was it because of the noise?  Or simply the passing of time?

In Spring 2014 the 9/11 Museum, whose design, in the words of the architects, was "guided by the principles of memory, authenticity, scale and emotion", will open.  This, perhaps, will be a more reverent space.  But one with an admissions fee - perhaps $20-25.  (The Memorial park will remain free.)  I wonder what further changes will occur with time.  Will the security measures be eased?  As memories fade - remember that most kids starting secondary school next month weren't born on 11 September 2001 - will the Memorial become less a place of pilgrimage and more a peaceful spot for office workers and tourists to sit and enjoy a sandwich?  It will be very interesting to see how this site, its atmosphere, and its public, change.

Have you visited these places?  If so, I'd be interested to hear about your experiences - please leave a comment below.
Posted by Seb Falk at 13:43