I'm flying to Chicago on Wednesday.  There'll be an unusual object in my luggage (is it wise to put that kind of statement online?).  Yes, you guessed it: it's another equatorium. 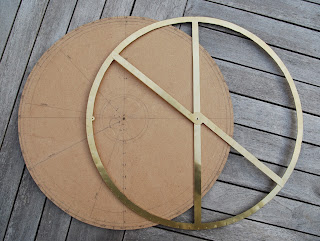 Loyal readers will remember my early series of posts (here, here and here) in which I described how I made, and learned to use, a medieval equatorium.  Although I am no great artist, I managed to create a passable replica of the instrument described in the manuscript I'm studying.  In the process, I also had to think a little about the tools and techniques that medieval craftsmen would have used.

But I didn't learn much about materials - I made my replica out of MDF, the cheapest and most manageable material I could find in my local DIY store.  So, when I arranged to speak about the equatorium at a conference in the USA, and I realised that my first replica was too big to fit in my suitcase, I decided to make another one using a more authentic - and challenging - material: brass.

The word "more" is crucial in that last sentence.  When I went online, researched a few different suppliers, ordered a 360 x 400 x 1.2 millimetre sheet of brass, and paid for it using my credit card, I was hardly recreating the experience of the medieval instrument-maker.  It's important to note that even the basic material is quite different: brass is an alloy of copper and zinc, but the ratio of these two elements can vary substantially.  The melting together of metallic copper and zinc, which is necessary to produce the high-zinc brass that can be rolled into thin sheets, was a seventeenth-century innovation.  (Before then, copper was heated with zinc oxide and charcoal.  This produced zinc gas, which diffused into the melted copper.)  And of course medieval metalworkers didn't roll their brass into sheets either - they hammered it out.

But I still felt there was something to be learned (and a prettier end result could be achieved) by working in brass.

Whereas the full-size equatorium would be six feet in diameter and my first one was half that, I had to scale it down again.  In order to avoid making the calculations and measurements too complicated, I decided the easiest thing would be simply to use a 1:1 ratio of inches to centimetres.  The effect is of course to reduce the dimensions by a factor of 2.54.  So my new equatorium is 36 cm in diameter. 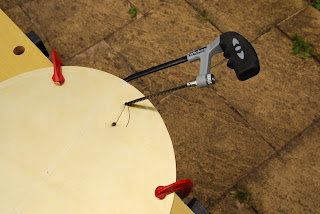 The manuscript instructions specify a face (see the earlier posts for what this is) of wood, and all that brass is expensive so I was happy enough to follow that.  But the Epicycle and label (pointer) had to be cut out of brass.  With only a basic hacksaw and file, this was quite a challenge, especially when it came to cutting out the semicircles from the inside of the Epicycle.  Although I bought a nice new workbench and some clamps, it was still a tough job drilling the starter hole - I broke two or three drill bits during this stage of the process.  (If there's a next time, I'll be tempted to invest in a drill press.) 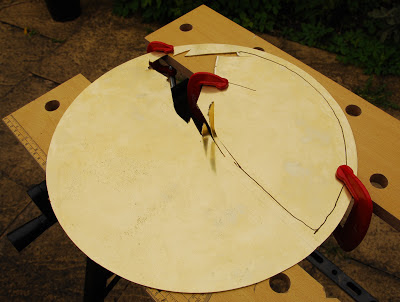 Still, it was very satisfying filing the brass down to precisely the right shapes, and I'm pretty pleased with the final result: 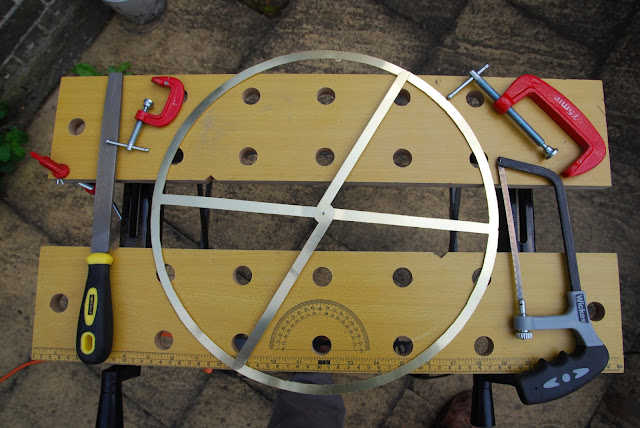 So, what have I learned?  Well, working in brass is hard!  And although I'm no artisan, it must still have been hard for craftsmen in the Middle Ages, whose tools were even more basic than my cheap set.  This raises a number of questions for my research.  For example, does the difficulty of working in brass make it more likely that an astronomer collaborated with an artisan to make this, rather than doing it himself?  Frankly, having had to make it myself, I am more sympathetic to the suggestion that this instrument wasn't actually made in the fourteenth century...  Or, at least, that it wasn't made at full size.  Working with a thin sheet of brass is hard enough when it's a 36 cm ring, and the brass has been rolled on an industrial machine.  I can't begin to imagine how tough it would have been not only to hammer out a 72" ring of brass, but to work with it without it bending out of shape.

It's all fodder for future research.  For now, I'm just curious to see what the friendly folk at United States customs will think of my unusual item of baggage...
Posted by Seb Falk at 17:32