We all miss the Sun at this time of year, don't we?  (Unless you're reading this from Australia, I suppose.)  Luckily for you, this blog post will help you find it!

In previous posts we've learned how to make and calibrate a planetary equatorium, and how to use it to find the longitude of the planets and Moon.  In my last equatorium post I mentioned latitude for the first time: unlike the planets, the Moon's latitude matters because medieval astronomers were rather keen to be able to predict eclipses.

The manuscript I've been studying mentions just one more use.  (There are one or two functions the author didn't get around to explaining, which I may get around to writing about later.)  We may, of course, want to find out where the Sun is on the ecliptic.  This is the easiest technique of all.

As our manuscript tells us, the Sun "hath non Epicicle ne non Equant": as seen from the Earth, it moves constantly in the same direction against the background of fixed stars throughout the year.  There's just one irregularity: the seasons (as measured between solstices and equinoxes) are not all equal in length).  This was noticed as far back as 330 B.C. by the Greek astronomer Callippus; the lengths of the seasons were first accurately measured around 130 B.C. by Hipparchus.  Hipparchus realised that accounting for this inaccuracy would mean abandoning one of the three basic assumptions about the Sun's motion:

The easiest principle to abandon was the third: Hipparchus gave the Sun an eccentric (but still circular) orbit.  It's following Hipparchus that I marked a large and slightly eccentric circle on my equatorium, with its centre displaced from the centre of the disc by 1/30th of its radius.  The direction of that displacement (the Sun's aux) moves by about 2° every 100 years; at the end of the fourteenth century, it was at the beginning of Cancer, or 90° as measured from the vernal equinox (the "head of Aries").

Since we already have the Sun's eccentric circle marked on our equatorium, all we have to do is look up its mean motus in our tables.  Regular readers of this blog will know that we use that information to stretch a black thread from the centre of the equatorium to the edge of the face, to where it is marked with the number matching what we've got for the mean motus. 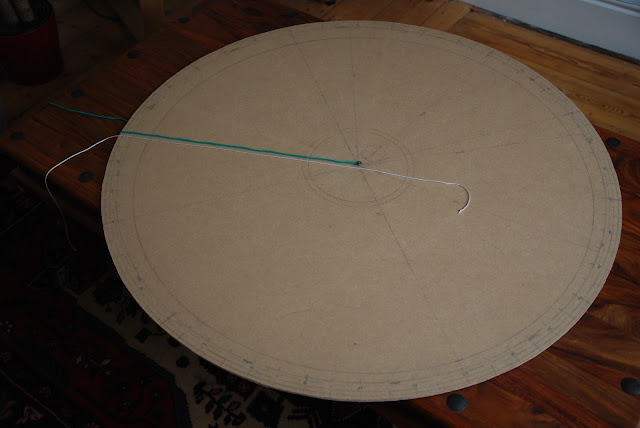