[Drumroll] Ladies and gentlemen, I shall now demonstrate the use of a medieval planetary equatorium!

In the first two posts in this series (here and here) I described how I made the physical structure of an equatorium according to the instructions in a fourteenth-century manuscript, and explained how I marked out the equatorium so that it could be used to find the location of the sun, the moon and the planets.

(Technical point: skip this paragraph if you're not interested.)  To be precise, the "location" is what medieval astronomers called the true place, which is more or less the same as the planet's longitude.  Celestial longitude is measured as an angle along the ecliptic (the path traced against the background of fixed stars by the sun in the course of the year) between the planet or star you're measuring and the vernal equinox (traditionally the first point of the constellation Aries, though a phenomenon called precession means this no longer corresponds to the true spring equinox).  We can also measure the celestial latitude, the angular distance above or below the ecliptic, but since the planets orbit broadly in the same plane as the sun, it doesn't vary much.

As I've suggested, an equatorium is a sort of analogue computer: you input information and it uses that information to give you another piece of information.  Unlike, say, an astrolabe, an equatorium can't be used for observation.  What it does is simply and speed up calculations; you could calculate the planets' positions geometrically, but it would be much more difficult and time-consuming.

In the last post I explained how Ptolemy modelled the planets' motion using two circles: the deferent and epicycle.  So in order to use the equatorium, we need to input two pieces of information: the planet's position on the epicycle, and the position of the centre of the epicycle on the deferent.  These were called the mean argument and mean motus, respectively.

There's one more piece of information, which I should have mentioned last time, as it involved marking my apparatus.  Of course we need to know the relative sizes of the two circles.  Fortunately the standard tables used by medieval astronomers (about which more later) included lists of the radii of the planets' epicycles.  Following the manuscript instructions, I marked the radius of each planet on the label [pointer] that spins around the Epicycle (I'll use a capital E to distinguish this bit of wood from the theoretical epicycle I've just been talking about).

Now to the fun stuff.  Here's how you find a planet:
1.  Look up the mean motus and mean argument of a planet in your tables.
2.  Lay a black thread in a straight line from the centre to the edge of the face, at the point equivalent to the mean motus.
3.  Lay a white thread parallel to the black thread, with one end at the equant point for the planet.
4.  Place the common centre deferent (a sort of reference point at the top) of the Epicycle on the deferent centre of the planet whose location you want to calculate.
5.  Turn the whole Epicycle so its centre lies over the white thread

This is what your equatorium will look like after step 4.  I couldn't find black thread, so I used green twine instead. 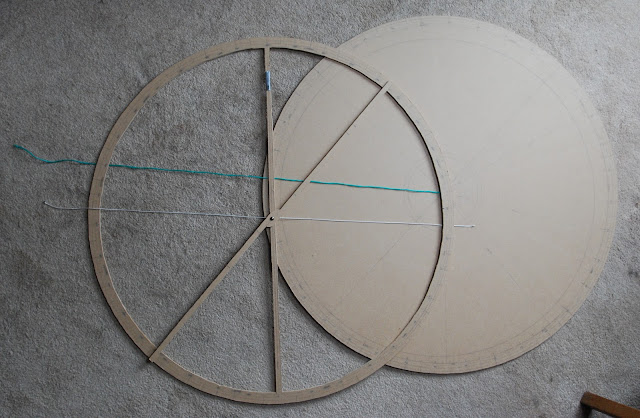 Almost there - just a few more steps...
6.  Starting from the white thread, turn the label anticlockwise the number of degrees equivalent to the mean argument.
7.  Now move your black thread to line up with the planet’s mark on the label
8.  The place where the black thread crosses the edge of the face is the planet’s true place. 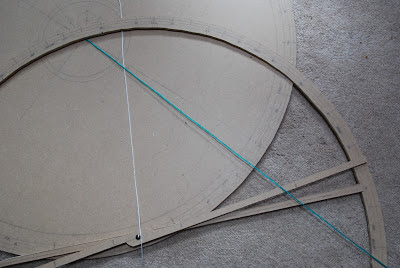 That's all there is to it.  I've simplified the method slightly, but the whole process takes just a few minutes, even allowing plenty of time to get the threads nice and straight and parallel.  I think you'll agree that, once you've got your head around the terminology, it's remarkably straightforward.  It's also a very accurate representation of the theory (and the theory does a great job of modelling planetary motion).  The biggest causes of inaccuracy are undoubtedly the way I've marked the degrees on the equatorium, and my (in)ability to get the threads straight and parallel.

So that's how you find the location of Venus, Mars, Jupiter or Saturn.  The method varies somewhat for the Sun, Moon and Mercury, but I probably won't post about that for a while, as all this has raised plenty of questions for me!  Many of the questions are about the astronomical tables, which I keep referring to rather breezily, but about which I know very little.  I'll blog about them as I learn more.

It's been fun making this model, and I've learned a lot, starting from a position of almost total ignorance about medieval astronomy in general and equatoria in particular.  There's a long way to go!  Thanks for reading.
Posted by Seb Falk at 13:27