My weekend as a medieval craftsman

With a free weekend, and fine autumn weather forecast, it seemed a good time to try making my own planetary equatorium.

I'm studying a manuscript called The Equatorie of the Planetis, which belongs to Peterhouse, Cambridge.  Much more about that in future posts; for now it's enough to say that it's a fourteenth-century instruction manual for the construction and use of a planetary equatorium, a device to compute the position of the planets.

Now, I'm no DIY expert, but I pride myself on being able to follow Ikea instructions without breaking anything, or myself, or having to call them for help (see right).  So I thought I'd have a go at following the instructions in "my" manuscript, and making my own equatorium.

This was not just an excuse to buy some new tools and hang out in the garden on a sunny(ish) afternoon; I was also trying to understand some of the practical issues involved in making a medieval instrument: the choices, the difficulties and perhaps the pleasures, too.

So on Saturday afternoon I headed down to Homebase and bought myself an 8 x 4-foot sheet of 6mm MDF, as well as some upholstery nails, two balls of twine, a coping saw and three rasps (I only wanted one, but it was a choice between a three-pack at Homebase and a nine-pack at B&Q...).  The friendly guys at Homebase kindly cut my board in half, and then chopped 11 inches off each half, leaving me with two large not-quite-squares, and two useful off-cuts.

Task #1: make a pair of compasses capable of drawing a three-foot circle.  This wasn't too difficult once I'd realised that they only needed to span the 18-inch radius, not the full 3-feet diameter.  (They appear on the blue towel in the second picture below.)

Task #2: draw the big circle and then cut it out of my squarish bit of MDF (twice).  Now, you may be thinking that three feet in diameter (that's 91.4 cm to those of you in civilised countries) is rather large for an astronomical instrument (though perhaps not by the standards of the Square Kilometre Array).  In fact, the original instructions call for a full six feet of circular precision, so my reproduction is a humble half-size replica.  (More about the issue of scale in future posts.)

At this point I realised that sawing in precise circles is actually quite hard.  Granted, your medieval craftsman might have had years to hone his art (and probably had a better workbench than mine - a toolbox, if you're wondering), but then my saw is probably sharper than his.  And I'm not sure when MDF was invented, but I guess he wouldn't have had the luxury of starting with a slim, smooth, knot-free sheet of board, either. 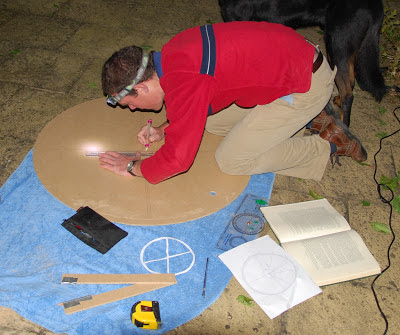 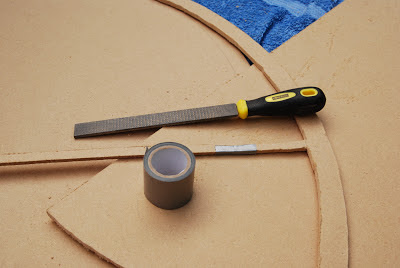 Task #3: cut out a smaller circle inside one of the larger ones, to leave a one-inch wide ring of wood.  This "epicicle", as it's named in the manuscript (not to be confused with the epicycle of Ptolemaic theory), is supposed to be made of metal, but I'm sticking with MDF for now.  The instructions call for a bar to be soldered across the middle, but I just cut out two semicircles, leaving a half-inch strip intact.

(The picture above left shows me marking out the semicircles by the light of a handy headtorch; you'll see I tried it out in paper first, on a 1cm:4" scale.)

Unfortunately (a) my sawing wasn't very straight, and (b) a three-foot-long, half-inch-wide, six-millimetre-thick strip of MDF is not very strong.  Never mind, there's nothing a bit of gaffer tap and some strategic rasping can't fix.  (What those medieval craftsmen did without gaffer tape, I have no idea.) 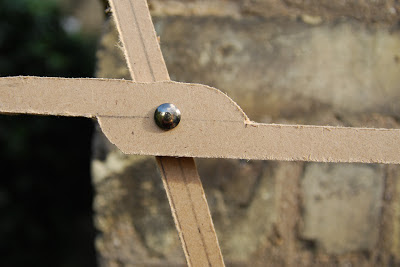 Task #4: Make a "label" [pointer] for my epicicle.  This is also supposed to be made of metal (the author specifies latoun, i.e. brass), but, you guessed it, I'm sticking with MDF.  The label is a pointer, a full three feet in length, which is fixed to the centre of the epicicle and spins round (that's what the upholstery nails were for).  As you'll see in the photo (right), the label has a little kink in the middle, as is traditional (see below, from a fourteenth-century astrolabe at the fantastic Whipple Museum).

So, after all that, I now have a lovely smooth three-foot disc, which is the face of my equatorium, and a similarly sized epicicle, complete with revolving label (see below).  Now all I need to do is to precisely mark out the zodiac signs, degrees and minutes round the outside; as well as the centre of the deferent circle and the equant point for each planet.

More about all that in a future post.  Check back here if you want to know more, or to find out why I bought those two balls of twine! 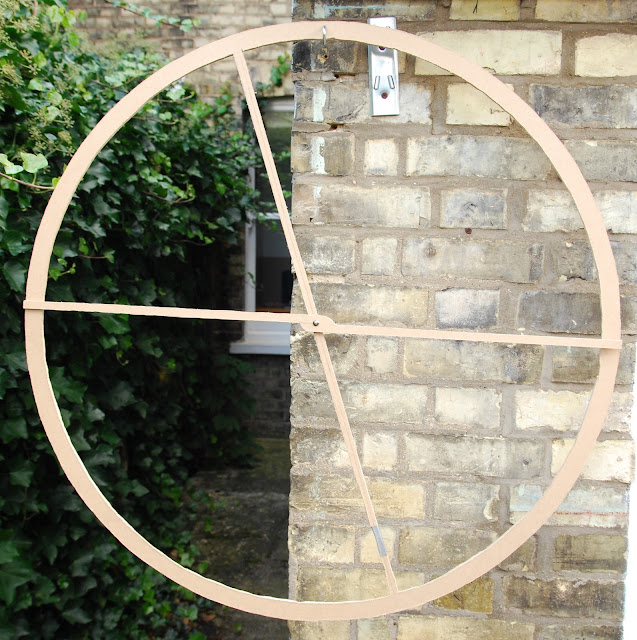 (Thanks to my wonderful housemate for some of the photos.)